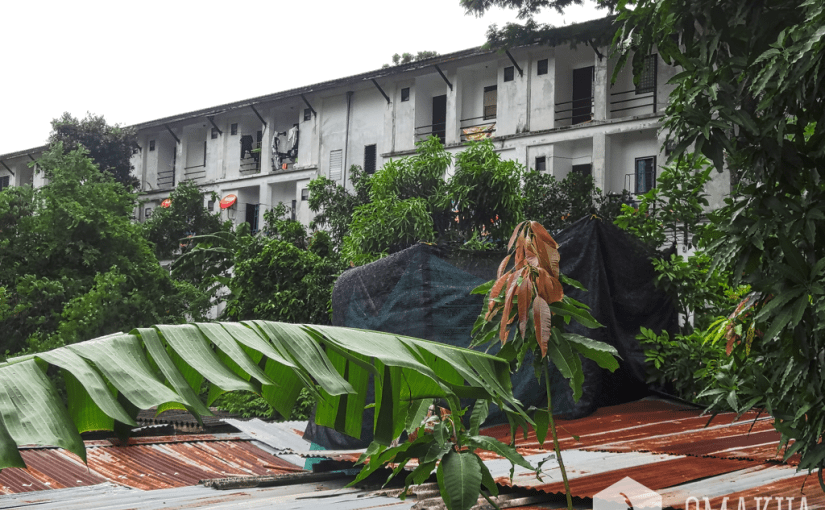 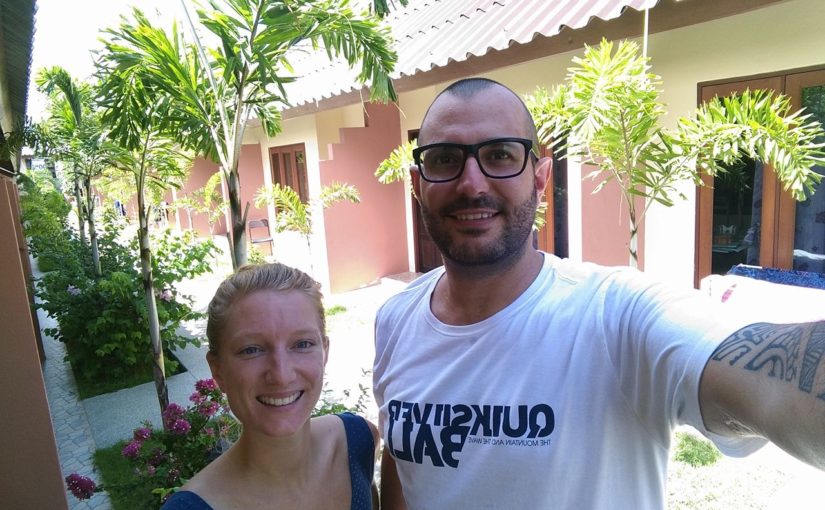 Just to let you know that we are back in Thailand, and will stay in Phuket for some weeks.

Phuket is known to be one of Thailand’s main tourism destinations, with heavy partying in Patong Beach (this is not where we stay ?

We have already contacted several NGOs working in different fields and are curious to learn more about the humanitarian and environmental stakes in Phuket. 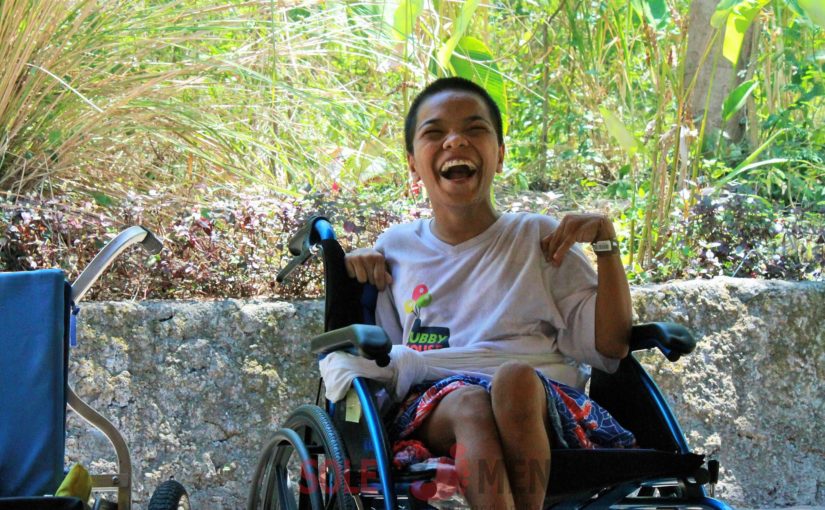 We were not surprised to learn that the situation of mentally and physically disabled in Bali is similar to those in Thailand. Sarah Chapman, who is part of the outreach team of the NGO Yayasan Solemen Indonesia, told us some of her experiences, and it sounded pretty much like what we have heard in Thailand.

The main religion in Bali is Hinduism. The Balinese religion and culture is rich and beautiful: All the temples, ceremonies, sarongs, and flower offerings. It is stunning. Ok, there are also parts of Bali religion, we do not appreciate, like animal offerings.

Just like the Thai Buddhists, the Balinese believe in Karma. Thus, being born with a physical disability means bad Karma, and disabled people are hidden (sometimes locked) away. They are considered a shame for the family

Read this article to learn more about the situation of the disabled in Thailand.

But Karma is not the only reason why people hide their physically, mentally and psychologically disabled family members. There is also a great lack of education about these diseases. Many do not know that psychological illnesses can be treated with medication. People with psychological disorders are often locked away because they are a threat to themselves and to others.

Further, many Balinese prefer to rely on traditional medication and rituals to treat mental and physical diseases. Even though, one should not underestimate the power of traditional and natural remedies, certain diseases cannot be treated this way.

Besides Karma and education, another main problem is the health infrastructure. Sick people are often not taken to a doctor or a hospital, because the village is too remote. Sometimes, the village people do not know where exactly the next hospital is, and how to get there. Most of the times, the journey to the hospital is too expensive. The families do not know where to stay close to the hospital, and simply cannot afford to stay away from work for a couple of days.

Solemen does field trips to reach the remote villages, and to help the families bring the ill to a doctor. To read more about Solemen click here. 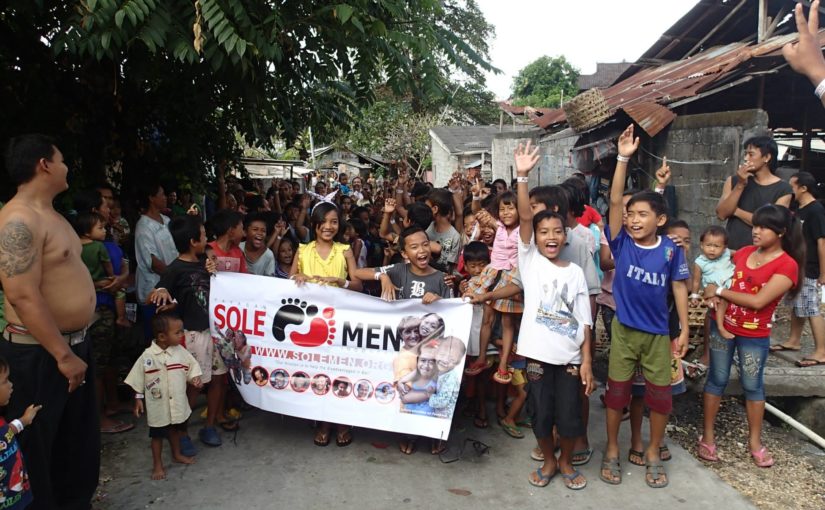 Sarah Chapman, a nurse in the UK, has travelled through Bali when she came around a young local girl, skinny and sick, in a remote mountain village. The girl, eight years old and 6.4 kilos, was too short and too skinny for her age, and obviously had severe health issues. Sarah knew she had to do something to save the girl’s life. She posted a picture on facebook, asking people what to do.

This is how Sarah met Robert Epstone, the co-founder of Yayasan Solemen Indonesia.

With the help of Robert, the young girl was taken to a hospital, and her health improved. She put on more weight, and was close to the 12 kilos she needed for a life-saving operation, but she passed away before the surgery was done. Sarah still had tears in her eyes when she told us the story, and so did we.

Sarah has now been working for Solemen for over three years, and could give us a very interesting insight into Solemen’s work when we met her in Kuta. Solemen was formed in 2010 with the goal to support the disadvantaged in Bali. Robert declared his intention to be barefoot until Solemen had raised one million US Dollars.  The reason for being barefoot is “to be in solidarity with those who don’t have a choice to wear or not wear shoes,” he says.

Today, Solemen works with 140 children and adults, and mainly supplies medical care for people in the remote areas of Bali. Nearly every day, Sarah and her outreach team are out on the field, taking care of people in need. She told us so many incredible stories, most with happy ends but some without.

If you want to read more about the situation of the mentally and physically disabled in Bali, click here.

Sarah told us the story of a man who has been living in a cage for two years. The man is mentally ill, and has repeatedly threatened his family and neighbours with a knife in order to get coffee and cigarettes. After people became scared of him, the family decided that there was no other choice, but to put him in a cage. When Solemen found the man, he was barely talking or moving. They took him to a hospital, got rid of the cage and renovated his house. The man now takes medication, and has returned to his home village.

Another sad story with a happy ending are two disabled boys, Komang and Wayan, who have been kept locked away in their house by their families. Their parents told them that they will die, if they leave the house. Solemen found the family in extreme poverty, provided food, clothes and regular therapy for the boys. They also provided customised wheelchairs for the boys, and created a permaculture garden to provide food for the family. The boys now leave the house and are happy to spend time ouside in their wheelchairs.

Solemen works with children and adults with many different kind of diseases. Hydrocephalus, skin diseases, mental and psychological patter. Many of the diseases are treatable, but the lack of education and the difficult access to medial infrastructures in remote areas transform diseases into fatalities.

Sarah is part of the Bali outreach team. Every day, they go into the remote areas, talk to the Banjars (the heads of village) and try to help people that need help. When possible, they are treated on the field, but in many cases it is necessary to transport the patients to hospitals in urban areas.

After the patient has been treated, Solemen tries to keep contact with the people, mainly via phone calls. Sarah said that once the trust is established, it is easier for the patients to ask for help again if they or somebody they know need it.

In the long term, Sarah dreams about a medically equipped car and hope that Solemen will eventually be able to pay a full time doctor. Further, she stresses education in the villages, and a better access to medical care in the remote areas. If you want to support Solemen, you can make a donation to the NGO directly here.

We are super happy to present our new project! ?

Chakrii needs our help to get off the streets! Being without his family, he has been living on the streets for many years. Help him to leave the streets of Chiang Mai’s red light district, and to get back to school.